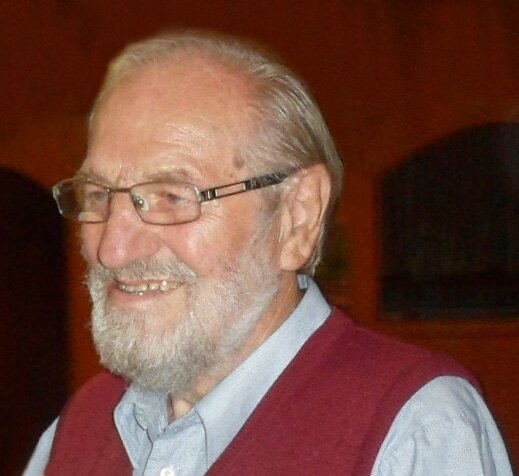 Wally passed away peacefully on October 29, 2022 at the age of 82. Long-time partner of 47 years to Audrey Halstead. Loving father to Sylvia and Johann “John” (Lee Ann), and step-father to Connie, John (Debbie), and Robert (Denise). Opa to Brandon, Nathan, Sydnie, Fallon, Emerson, step-Opa to Eric and Papa to William, Kathryn, and Elizabeth. Uhropa to one great-grandchild. Wally will be also missed by his many friends.

Wally emigrated from Germany with his wife Christa and daughter in 1966 and worked as a foreman for Domore Masonry retiring in his late 40's. An avid outdoorsman, Wally was happiest outside be it boating, hunting, gardening, fishing or ‘puttering around.’ Wally enjoyed hosting family and friends at his cottage in the Kawarthas. Wally was a founding member of the GTEV Alpenrösl Schuhplattler dance goup and later on with partner Audrey in the Seniors Folk Dance Group. For many years, Wally played soccer both as a member of Club Heidelberg and on the Old-Timers team until the leagues termination. He would watch every soccer match he could on television, and loved cheering for Germany in the World Cup. He could be counted on to give a helping hand to anyone who needed it, especially with his skills as a craftsperson, mason, and builder.

Arrangements entrusted to George Darte Funeral Home, 585 Carlton St., St. Catharines. In keeping with Wally’s wishes, cremation has taken place. A graveside service will be held in the Spring 2023. If desired, donations to a charity of choice would be appreciated by Wally’s family

A Memorial Tree was planted for Waldemar
We are deeply sorry for your loss ~ the staff at George Darte Funeral Chapel Inc.
Join in honoring their life - plant a memorial tree

Share Your Memory of
Waldemar
Upload Your Memory View All Memories
Be the first to upload a memory!
Share A Memory
Plant a Tree