John J. Patterson (George Darte’s Great-Grandfather) started our business in 1911. He had worked on the then new Welland Canal and had made enough money to get into something he had always wanted -- funeral service. His son-in-law George Darte (who married Maude Patterson) joined him and his two brothers-in-law Harold and Gerald Patterson. Harold and Gerald were twins who had gone off to fight in WWI. Upon their return it was decided that there was not enough room for all the partners, so George Darte and John Patterson started a funeral home in Port Colborne, Ontario.

It was decided that St. Catharines was a bigger city, so George Darte moved his family in 1927 to the old Pilkington Glass Company building at the corner of Court and King Streets in St. Catharines. George’s son, Osgoode joined him in 1936 and then enlisted when the war broke out in 1939. Osgoode obtained the rank of Major with the 2nd/10th Dragoons and was called home in 1945 upon the illness and then death of his father.

In 1972 George Darte joined his father, and they were both then joined by George’s brother Patrick in 1976. In 1979 a 10,000 square foot building was erected to serve the growing business on Carlton St. George and Patrick went their separate ways in 1980 with Patrick running the Court St. location and George running the Carlton St. location.

In 1990 another 12,000 square feet was added to the Carlton St. location. In October of 1998 Patrick sold his business to an out of town chain of funeral homes. This left the George Darte Funeral Chapel as the only independent and locally owned funeral home in St. Catharines. George’s son, Gregory joined the firm to become 5th generation Darte’s to work with the company. 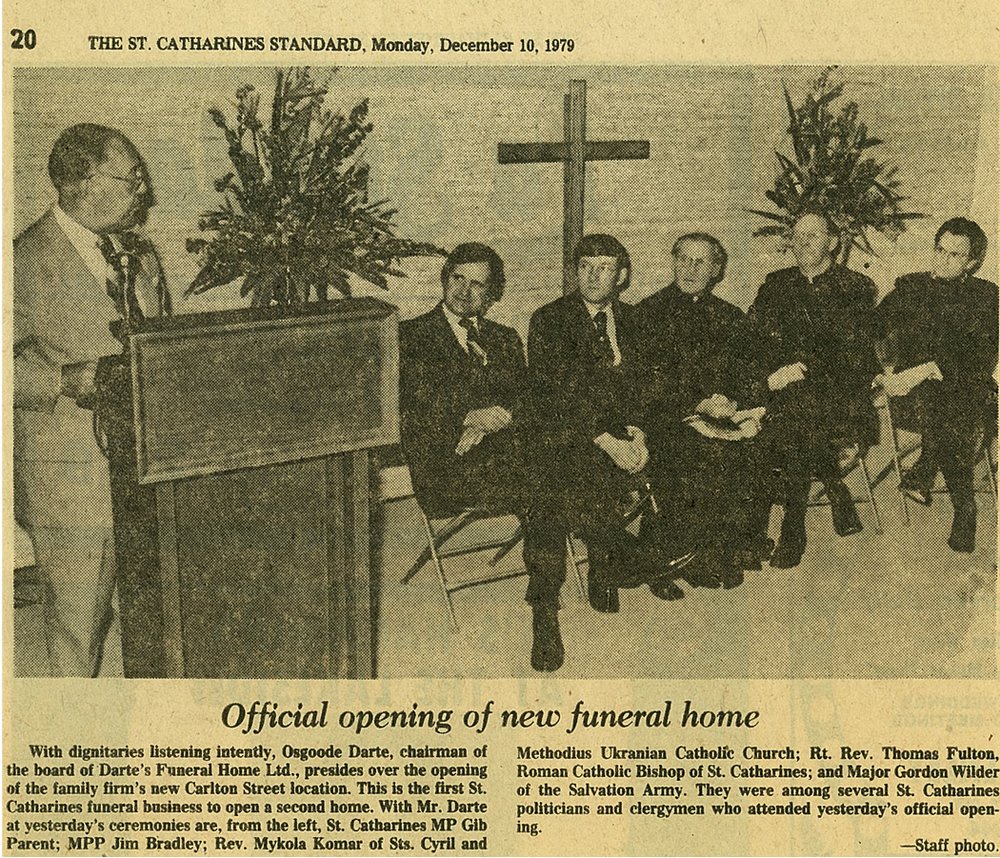 About Us ~ Our Staff ~ Map & Directions ~  Community Involvement ~ Career Opportunities