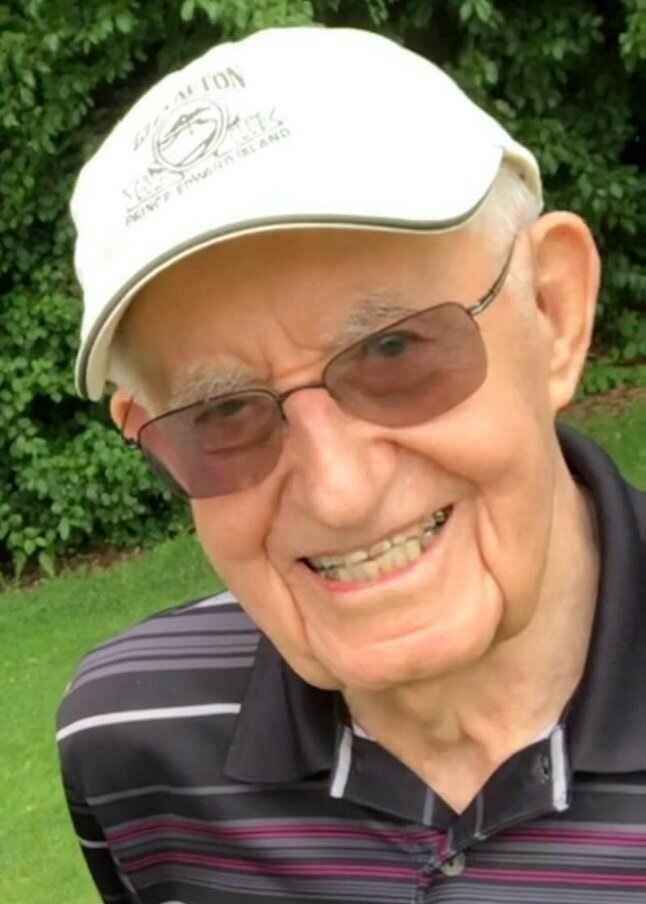 It is with saddened hearts that we announce the passing of a dear Husband, Father, Grandfather, and Great Grandfather.
Donald Herbert Watts - in his 99th year - passed away in the St. Catharines General Hospital after many weeks of kind and dedicated care.

During WW2 Don became an RCAF Pilot Officer, where he made life-long friends.  A pilot, upon hearing of Don's passing, quoted a portion of a well-known Air Force poem, “He has slipped the surly bonds of Earth" - how appropriate!

Upon leaving the service Don attended the University of Toronto where he graduated with a Business Degree. He later became Vice-President of Sales with the Beaver Wood Fibre Company (Georgia Pacific Canada) in Thorold, travelling across the country, and to the US and Britain.

In 1951 he married a Merritton girl - Rosaleen Halton. Together they raised a wonderful family of which Don was very proud. Dan (Carol) of Windsor, Sandy (Richard) of St. Catharines, John (Linda) of Grimsby, and Anne-Marie of Brantford. Then came the Grandchildren: Jaymie Blanchard of Montreal, Tara Watts of Windsor, Andrae (Marie) Blanchard of St. Catharines, Brendan (Lindsey) Watts of Windsor, Nicole Brunet of Pembroke, and Mitchell Brunet of Laramie, Wyoming.

Then followed the ‘Greats’: Eloise, June Rose, and Aria.

Don was a quiet, kind and gentle man. He created beautiful carvings of birds, was an avid reader and lifelong golfer, enjoying many winter visits down south.

Don was a loving son to his parents - Walter and Elsie Watts of Thorold (deceased), brother to Betty Smith (Jim), Doreen Herbert (deceased), Margaret Jeske (Bill), and Robert (deceased). Dear brother-in-law of Patricia Langille, fondly remembered by Gerald Brunet. Uncle Donny will be missed by many nieces and nephews across Canada and the US.

In lieu of flowers, donations to the MS (Multiple Sclerosis) Society of Canada would be greatly appreciated.

Family and friends will be received on Tuesday, September 6, 2022 from 10-11am at George Darte Funeral Home, 585 Carlton St., St. Catharines. Funeral Service will follow at 11am at the funeral home.

Share Your Memory of
Donald
Upload Your Memory View All Memories
Be the first to upload a memory!
Share A Memory
Send Flowers
Plant a Tree