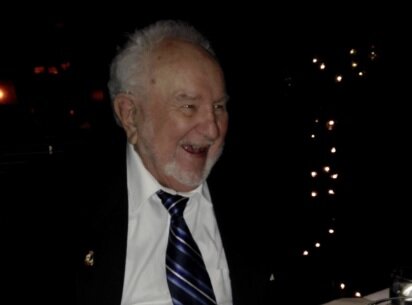 It is with great sadness that the family of Mr. Ronald Edward Allen announce his passing on Monday, August 29th 2022 in his 86th year with family by his side. Ron leaves his cherished wife of 64 years, Cathy; children Mary (Murray), Ron (Tracey) and Mike (Beth); grandchildren Brandon (Ting), Colin (Holly), Deanna (Bradley), Joshua, Dennis and the late Heather (Mark); siblings Shirley and Janet. Ron met Cathy in Nova Scotia while recruited in the Navy. Both made their way to
Port Dalhousie where they raised their family. Ron retired after a successful career as a Firefighter for the city of St. Catharines. He was known as the King of practical jokes, avid gardener, hunter and fisherman. Travelling up North was one of Ron’s favourite past-times when he was not with his family. Ron was predeceased by his loving parents, Ed and Edna; siblings, James and Mary.
In keeping with Ron’s wishes, funeral arrangements have been entrusted with GEORGE DARTE FUNERAL HOME, 585 Carlton St., St. Catharines. Cremation has taken place and a private family service to be held. Please consider making donations in honour of Ron to the Canadian Cancer Society.

A Memorial Tree was planted for Ronald
We are deeply sorry for your loss ~ the staff at George Darte Funeral Chapel Inc.
Join in honoring their life - plant a memorial tree

Share Your Memory of
Ronald
Upload Your Memory View All Memories
Be the first to upload a memory!
Share A Memory
Plant a Tree