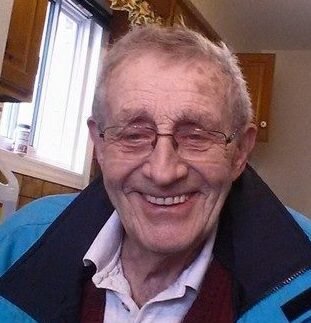 Harry Van Helvert passed away peacefully surrounded by his loving family at Lincoln Park Retirement Home in Grimsby, at the age of 88. Beloved husband of 65 years to Dorothy. Loving father of Tim, Sandra (the late David), Joyce (Phil), and Brian (Nancy), and Papa to Rebecca (Raj), Laura, Rachel, Noah, Chloe, and Grace. He will be fondly remembered by his sisters Tina, Thea, Ria, Willie, Lina, and Maggie, as well as many nieces, nephews, and friends. He was predeceased by sisters Joanne, Wilhelmina, Ann, and Mary, and brothers John, Frank, and Bill, as well as parents Hendrikus and Theodora.

Born Henricus Johannes in 1933 in Dinther, Noord-Brabant, the Netherlands, he grew up on a farm as the fourth of 14 children. In 1950, his family immigrated to Canada, where they lived in Uxbridge and Stayner before settling in Niagara-on-the-Lake, Ontario.

As a young man, he began working at the General Motors plant while helping his father on his grape farm in the evenings. In 1957, he married the love of his life. He and Dorothy moved into the home they had built shortly before the birth of their first son, and lived there for almost 60 years. He retired from GM as a tool setter, when he and Dorothy began travelling to Florida each winter. He also devoted his time as an usher at Central Community Church and a volunteer at the Niagara Warehouse of Hope.

Harry was known for his faith in Jesus, his cheerful and friendly nature, and his lifelong tireless work in the service of others. He was also known for his jokes, his remarkable mechanical skills, and his affectionate nickname, "Harry Don't Do That". He enjoyed tinkering and could rig up a fix or solution for anything. He loved spending time with his close-knit family, especially camping, feeding birds, and spending time outdoors.

The family wishes to express deep gratitude to the nursing staff at Lincoln Park in Grimsby, especially Janet and the many nurses from St. Elizabeth Health Care.

Service for Harry will be held on Wednesday, August 17 at 11am at George Darte Funeral Home on Carlton Street. Visitation and prayers will be Tuesday, from 2-4 and 6-8pm. In lieu of flowers, donations to the Niagara Warehouse of Hope would be appreciated by the family. Interment will be at a later date.

Share Your Memory of
Harry
Upload Your Memory View All Memories
Be the first to upload a memory!
Share A Memory
Send Flowers
Plant a Tree