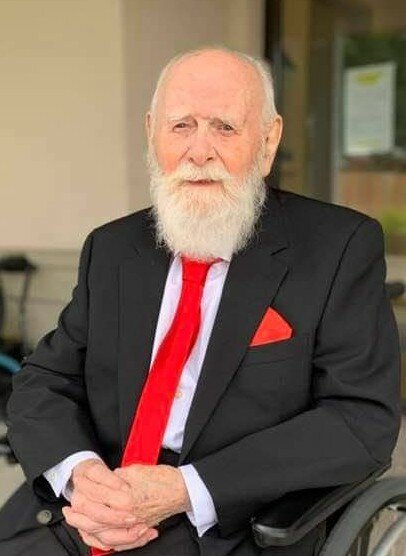 I have fought the good fight, I have finished the race, I have kept the faith. – 2 Timothy 4:7

Born, July 22, 1921 in Fiume Veneto, Italy. Passed peacefully surrounded by his family at Extendicare, St. Catharines, on Wednesday, April 20, 2022 in his 101st year. Devoted husband of 55 years to the late Amalia (nee Bertolo) Tesolin. Beloved Papalino to Sandra (Michael) D’Avirro of Komoka, On., Umberto “Bert” (Valerie Grant) of Victoria, BC. Cherished Nonno of Jeremiah (Saija) Tesolin of Finland, Jessica (Dylan) Tesolin-Goddard of Hudson, QC., and their mother Neva of St. Catharines, Nicole (Craig) D’Avirro-Beattie of North Bay, Adrian (Melanie) D’Avirro-Pugong of St. Catharines. Great Grandfather to Sebastian, Remi, Aava of Finland, Ava, Emmett of North Bay, Amalia and Charlotte of Hudson, QC. He will be dearly missed by many nieces, nephews of Italy and friends. “Adored Papa” to his Extendicare family. Predeceased by his brother Piero and sister Albertina of Italy.

Ubaldo’s life-long career as a barber started at the young age of 14 in Italy. His happiest memories were the four years he rode his bicycle 4 days a week from his home in Fiume Veneto to work in Pordenone. He immigrated to Canada in 1951, married Amalia on February 6, 1952 in Toronto and opened Ubaldo’s Barber Shop in 1956 on Facer St., St. Catharines. He was respected, trusted and well known by many happy customers. He had the most gentle touch with young and old and had “The hands of an Angel” for straight razor shave and hair cut.

Ubaldo was instrumental in advocating to have the Queen Elizabeth Centre built (now known as the Boys & Girls Club). He was the original founder in 1961 of Club Roma and was the Oldest Surviving member. He had a passion for gardening and in 1999 was awarded the City of St. Catharines’ Civic Beautification Trillium Award for “Landscape Harmony” His family value, his singing, love for opera, ballet, classical music, birthday and anniversary celebrations. His birthday cards were always the first to arrive in the mail and brought such joy. Ubaldo always warmly welcomed family, friends and acquaintances in his home and was a gracious host.

His precious mother Argentina taught him the importance to act with a clear conscience. Ubaldo was in audience with seven popes, the last being Pope John Paul II on the occasion of our parents 50th wedding anniversary in February of 2002. He was a long time devoted member of St. Alfred Church, Knights of Columbus, St. Catharines Horticultural Society, Fogolar Furlan of Niagara and Club of Fiume Veneto Toronto. Ubaldo was an amazing story teller, writer and very charismatic. He is held forever in our hearts. As long as we live Ubaldo too will live; for he is now a part of us; as we honour and lovingly remember him.

Visitation will be held at the GEORGE DARTE FUNERAL HOME, 585 Carlton St., St. Catharines, on Monday, April 25, 2022 from 2-4 p.m. and 7-9 p.m. with Vigil Prayers being held at 3:30 p.m.. Funeral Mass will be held at St. Alfred Roman Catholic Church, 272 Vine St., St. Catharines on Tuesday, April 26, 2022 at 11 a.m. followed by Entombment at Pleasantview Memorial Gardens, Hwy 20, Fonthill. Memorial donations may be made to Comboni Missionaries or Community Support Services of Niagara.

Share Your Memory of
Ubaldo
Upload Your Memory View All Memories
Be the first to upload a memory!
Share A Memory
Send Flowers
Plant a Tree