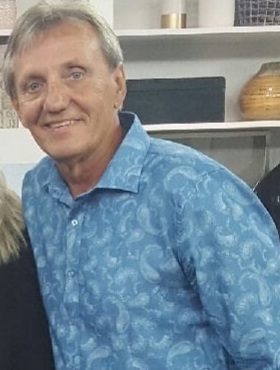 It is with immense sadness and broken hearts that we announce the sudden passing of the one, the only, John DeLuca at the young age of 65, after a brief battle with cancer. John leaves behind his beautiful wife, Christine of 37 years; his three happy thoughts, Joe (Rhonda), Liegha (Blair) and Kristen (Dustin); baby sister, Karen Wojcik, brother-in-law Jeff, sister-in-law Joan (Mike). John was the devoted Papa to Avery and Emery and a special great-uncle to: Greg, Ethan, Isabelle, Myles and Josh. Predeceased by his parents, Lou and Kathy, sister Arlene, baby brother, Timothy and sister-in-law Adele (Koko) and brother-in-law Ed Woj. John had many nieces and nephews that he treated like his own children. He will be deeply missed by: Eric (Christine), Kevin, Joe (Sir H.), George, Suzie, Terry, James and Jennifer. Forever a loving and supportive son-in-law to Josephine (Joseph).

John was a proud North-Ender from Hamilton, transplanting his sense of community and friendliness to Grimsby in 1984. He enjoyed a long career at Stelco for 35 years as a Machinist, often talking math that would only make sense to Einstein. To anyone that came into John’s orbit, it quickly became clear that he was a friend to all and a steady, reliable willing hand in times of need. Although, he was not here for a long time, he was certainly here for a good time. The family wishes to express their gratitude to the doctors and nursing staff at the WLMH and to his many friends for the outpouring love and support.

Arrangements have been entrusted with the George Darte Funeral Home 585 Carlton St.

In keeping with John’s wishes, cremation has taken place and a Celebration of Life will be announced at a later date.

As John would say, “Thanks for coming out"

A Memorial Tree was planted for John
We are deeply sorry for your loss ~ the staff at George Darte Funeral Chapel Inc.
Join in honoring their life - plant a memorial tree