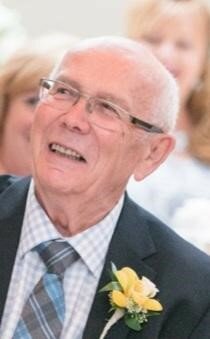 It is with great sadness that as of February 14th we announce the passing of an amazing husband, father and grandfather. Husband of 50 years to Colleen Smith; Father to Blake (Andrea) and Brent (Alicia); Grandfather to Ava and Ethan. Bill will be welcomed to Heaven by his parents Edward and Pauline and his beloved Mother In Law Edna. Bill grew up in St.Catharines and loved driving his Valiant around town and that soon blossomed into his love and passion for drag racing. Brillo (as he was referred to by his close friends) spent hours upon hours working on his car. One day though he met the love of his life and on their third date he proposed, from that moment on he became a family man. He could always be seen at the arena or ball diamond cheering on his boys. He always put his family and friends first. When retirement set in, his love of gardening flourished as he was awarded the Trillium award by the city of St.Catharines in 2016. He was a man who could fix anything and would drop everything to help anyone in need. Bill was a hero to both of his sons and inspiration to his grandkids. He will be missed by everyone whose lives he touched, but we are all greater people for knowing him and having him be part of our lives. A celebration of life will be held for Bill on a later date surrounded by friends and family.

A Memorial Tree was planted for William
We are deeply sorry for your loss ~ the staff at George Darte Funeral Chapel Inc.
Join in honoring their life - plant a memorial tree

Share Your Memory of
William
Upload Your Memory View All Memories
Be the first to upload a memory!
Share A Memory
Plant a Tree