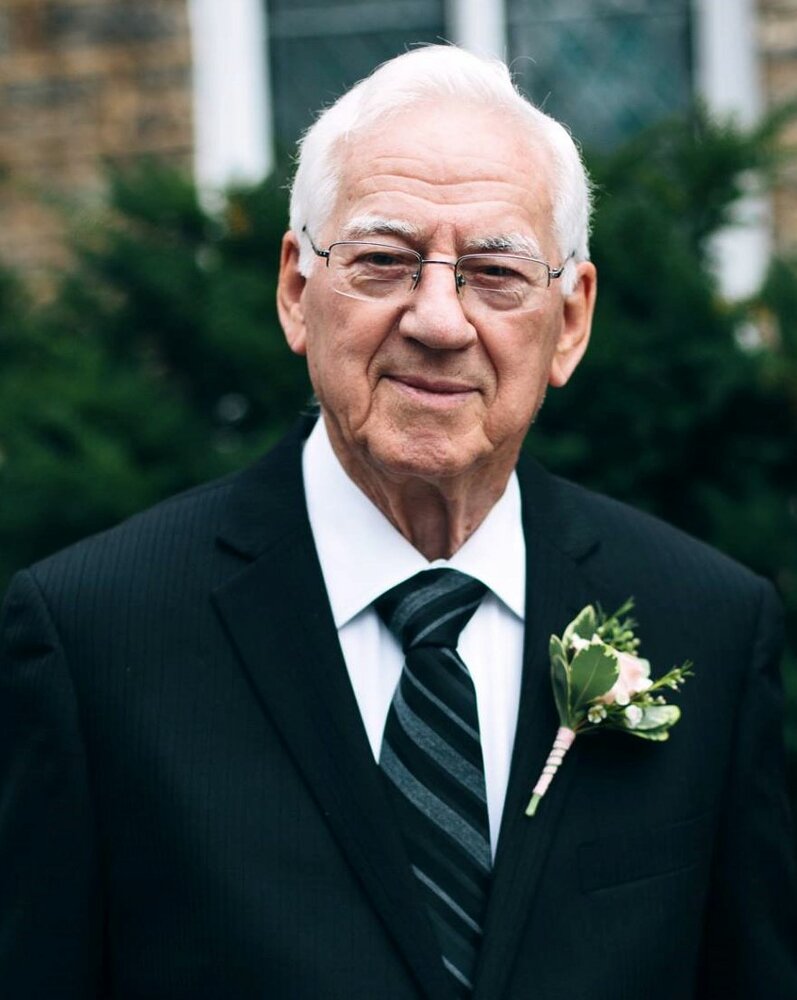 Herbert (Baxter) Chaytor was born in St. John’s, Newfoundland, to Baxter and Caroline Chaytor on September 6, 1927.

He was known to some as Baxter and others as Herb or Herbie. He loved to share stories of his life experiences, windows into who he was. He grew up in St. John’s, Newfoundland, and cherished what he referred to as “The Premiere Province” of Canada. Before moving to St. Catharines, Ontario, in 1948 he had various jobs, but working with The Salvation Army war services was a particular highlight.

Once settled, Edna joined him in St. Catharines and in 1951 they were married. They shared many wonderful years together until her death in 2008. Baxter was a father to Graham (Marjorie), Brenda (Roland) Colbow, and Sandra (David) Boone. He was a proud Poppie to Jennifer (Matt) Spencer, David Chaytor, Bradley Colbow, Christyn (Jeremy) Grampola, Stephanie (Gregory) Jolly and David Boone Jr. (fiancé Kristen Dregishan).  He was also blessed with three great-grandchildren, Ryan Spencer, Michael and Lucy Grampola. Also mourning his loss are many nieces, nephews and dear friends.

Bax (Herb) was a lifelong member of the The Salvation Army and played in the band from the age of 9. Even in his 90s, he enjoyed playing the tuba. He loved the Lord and this was a talent he used in ministry.  In retirement, Bax was involved in catering dinners at The Salvation Army. This was another area of ministry that was appreciated by many people who enjoyed the fruits of his labour.

Bax (Herb) was employed by General Motors for many years. He was involved in Scouting for over 50 years. He was a handyman and could always be called upon to help with building projects.

In retirement, he enjoyed vacations with his siblings and family members. He was adventurous and age was no barrier for him. He loved a “good game of cards”, playing a game called 120 (Growl) until the wee hours of the morning.

Bax (Herb) was a role model to so many of our friends and family. One friend wrote, “There are some people, some very rare people, that you think may live forever because they are bigger than life”. We wish this was the case but to honour him, we need to take the lessons he taught us and strive to live a life that mirrors his example.

In recent days, when his mobility became increasingly difficult, his mind remained sharp and his wit never left him. On Sunday, January 23, 2022, in his 95th year, Baxter (Herb) spent his last moments with his loving family and passed away peacefully at the Niagara Health System, St. Catharines site.

Baxter (Herb) is now safe in the arms of his Lord and Saviour.

Visitation will take place on Thursday, January 27th from 2-4pm and 7-9pm at George Darte Funeral Home, 585 Carlton St., St. Catharines. Funeral Service will take place on Friday, January 28th at 10am at Salvation Army St. Catharines Citadel Church with interment to follow. Those wishing to attend the visitation or funeral service must RSVP to the funeral home by calling 905-937-4444 as capacity is limited. Proof of double vaccination/identifcation is required for those who wish to attend the visitation or funeral service. If desired, donations to the Salvation Army (Citadel Band- St. Catharines) would be appreciated by the family.

Share Your Memory of
Herbert
Upload Your Memory View All Memories
Be the first to upload a memory!
Share A Memory
Send Flowers
Plant a Tree