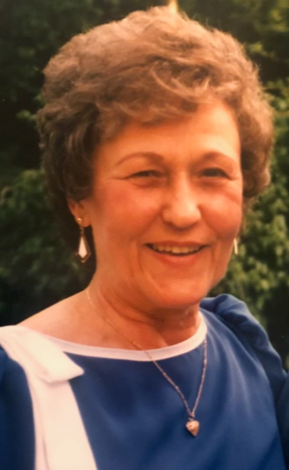 Nadia Kostecky, age 97, passed away peacefully on December 11th, 2021 with her loving family by her side. She was born on June 20th, 1924 in Turivka, Ukraine (Volyn Oblast) to Lena and Ivan Loginowskyj.

She is predeceased by her husband Walter who passed away in 2014. They were married for 68 years. Nadia is survived by her daughter Valentina DiPietro (Vince), son Stefan Kostecky (Kim), grandchildren Denise Viscek (Frank), Lisa Garlent (Shawn), Kristian Kostecky (Karen) and great grandchildren Nicole, Vanessa, Julia, Alivia, Orli and Ethan. She will be missed dearly and remembered by many as our loving Baba.

Nadia and Walter met in Poland on their journey to Canada. The pair overcame extreme adversity in their lives as they fled from Ukraine for a better life. Nadia made the journey over the Ukrainian-Polish border on foot, and continued until she reached Germany. After coming to Canada on the Samaria ship on July 28th 1948, she landed in Halifax and later relocated to Rolphton, Ontario where she reunited with Walter who had come to Canada a year prior to establish a life here. They eventually made their way to St. Catharines Ontario where they lived out the rest of their years.

Baba and Gigi, as affectionally known by their grandchildren and great grandchildren, found joy in spending time with family, cooking traditional Ukrainian dishes such as varenyky, borscht and deruny, and spending time outside tending to their gardens or enjoying time at Port Dalhousie. If we had to choose three main characteristics that illustrated Baba and Gigi it would be their capacity for hard work, love for family, and courage. We will miss Baba dearly, and we are so thankful for all the good memories, healthy years and the immense sacrifice both endured for the betterment of their family who they loved so dearly. We find peace in knowing they are together once again. Until we meet again, love you forever.

There will be a private prayer and funeral service for immediate family members only. The family asks that in lieu of flowers, donations be sent to the Linhaven Home for the Aged.

Share Your Memory of
Nadia
Upload Your Memory View All Memories
Be the first to upload a memory!
Share A Memory
Send Flowers
Plant a Tree