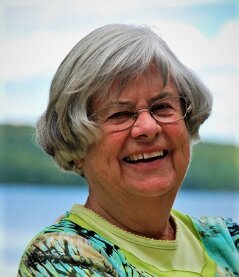 Peacefully passed away on December 10, 2021 at the Royal Henley Retirement Residence with family by her side. Doris Mary Chown (née Mikkelborg) was born on Christmas Eve, 1928 and grew up on a farm near Zealandia, Saskatchewan. As the second youngest of six siblings she spoke fondly of her childhood years where milking the cows, collecting hens’ eggs and driving the truck (at age 12!) were part of everyday life. Throughout her long life she was influenced by her parents’ hardy resourcefulness and strong work ethic. She embraced progressive change and liberal values. Family was her greatest joy.

In 1952 Doris graduated from nursing at the University of Saskatchewan and moved east one year later to join her older brother in St. Catharines, ON, working as Supervisor of Pediatric Nursing in the brand-new Hotel Dieu Hospital.

Doris met Mackenzie Chown at a Liberal Party meeting and they married in 1955. They raised five children and Doris ran a busy, happy household, fitting in time for bridge and participating in Mac’s life as a lawyer and as mayor of St. Catharines (1968-1972). The cottage they built in Muskoka became a family gathering place and Doris relished any opportunity to use her practical skills: swinging a hammer, cutting firewood, gardening and baking cinnamon buns or waffles for a crowd – and she always delighted in winning at cards or Scrabble! Although Mac died far too soon (1983) Doris went on to live a full life and loved having her children and grandchildren around her at the cottage or her Southgate condo, going on trips with friends or to see family, and becoming a bridge master.

A Private Family Celebration of Life will be held for Doris on Saturday, December 18 at 2p.m. at GEORGE DARTE FUNERAL that is limited to immediate family.  Live streaming will be available for the Service. You can view the Live Stream by clicking the following link just prior to service time on Saturday:  https://youtu.be/vwnduM-zIjg

In lieu of flowers, donations may be made to United Way Niagara.

Share Your Memory of
Doris
Upload Your Memory View All Memories
Be the first to upload a memory!
Share A Memory
Send Flowers
Plant a Tree