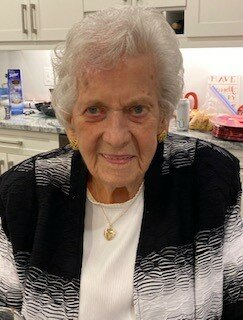 It is with broken hearts that the family announce the passing of Anita at the age of 92.  Anita passed away peacefully surrounded by her three children at her bedside vigil.

Anita is predeceased by her beloved husband, Malcolm (Mac) in August 2001.  She is also predeceased by her parents Joseph and Nathalie Barrette and siblings, Lorne (Barrette), Nan (Jack), Doreen (Costantini) and Marguerite (Boville).  As a cherished mother, she will be deeply missed by her children, Pat Banning (Jayne), Kathy Verge (Steve) and Sue Tattrie (Ardyn)

Anita was born in 1929 and raised in Ottawa during the Great Depression.  One of seven Barrette children, she had three brothers and three sisters;  Lorne, Nan, Doreen, Marguerite, Edmond and Raymond.

In 1951, she married a handsome young Canadian Air Force Corporal, Malcolm (Mac) Banning and began her life of travelling from Air Force post to post.  Military postings in Ottawa, ON, Washington D.C., Colorado Springs, Colorado, Trenton, ON, North Bay, ON and then moves to Hamilton and St. Catharines kept Anita busy raising her family while supporting her husband in his military career.  Anita worked at Kmart in St. Catharines for over 13 years before retiring to spend the winters in Florida with Malcolm (Mac).

A kind and generous person,  Anita enjoyed a very full life, leaving us all very sad, but with many wonderful stories and memories to share and celebrate her life.

Anita will forever be in our hearts.  As per her request, cremation has taken place and she will be laid to rest with her husband Malcolm at the Victoria Lawn Cemetery, St. Catharines.

A private family service and celebration of life will be held at a future date.

If so desired, donations in Anita's memory can be made to the Canadian Cancer Society or the Kidney Foundation.

Share Your Memory of
Anita
Upload Your Memory View All Memories
Be the first to upload a memory!
Share A Memory
Send Flowers
Plant a Tree