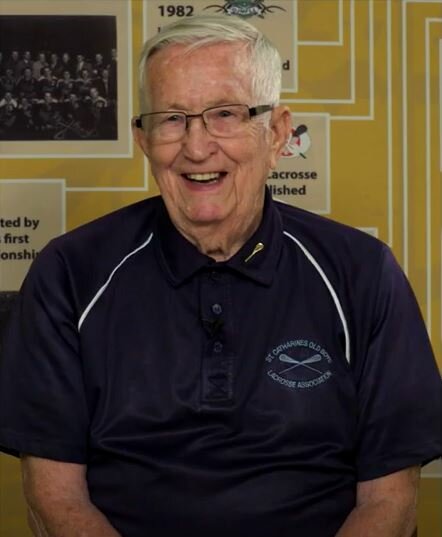 Passed away peacefully on Friday, October 8, 2021 in his 95th year. Beloved husband of Lorna just shy of their 70th anniversary. Loving father of Jill (Jim) Ross and cherished Grandfather of Jenn Ross. He will be dearly missed by his sisters Eleanor (Richard) Robertson, Beth VanDerLoos, many nieces, nephews, great nieces, great nephews whom he loved them all. Predeceased by his parents Lyla and Albert, and siblings Don “Ook”, Glenn “Pete”, Al, Barb and Yvonne.

Whitey was born in Peterborough and moved to St. Catharines at the age of 10 where he started his long sports career playing lacrosse for the bantam Shamrocks. He went on to play minor lacrosse with the Tecumseh’s, and then the Jr. and Sr. Athletics. His hockey days started with Memorial and Alexander public schools and then with the St. Catharines Midget, Juvenile Jr. B and Jr. A teams. He also spent one season playing in Scotland. Whitey has been involved with the St. Catharines Old Boys Lacrosse Assoc. for over 50 years. Being a Past President, Honorary and Life Member. He is also an inductee in the St. Catharines Sports Hall of Fame, the Ontario Lacrosse Hall of Fame and the Canadian Lacrosse Hall of Fame. In 2002 he was presented with the Queen’s Golden Jubilee Medal. He was an avid bowler, softball and baseball player and was St. Catharines’ Sportsman of the year in 1985. Whitey retired from General Motors in 1986 after 36.5 years in the Pattern Shop.

In accordance with Whitey’s wishes, cremation has taken place and a Celebration of his Life will be held at a later date. Arrangements are entrusted to the George Darte Funeral Home, (905) 937-4444. Memorial donations may be made to the St. Catharines Old Boys Lacrosse Association or the Ontario Lacrosse Hall of Fame.

A Memorial Tree was planted for William
We are deeply sorry for your loss ~ the staff at George Darte Funeral Chapel Inc.
Join in honoring their life - plant a memorial tree

Share Your Memory of
William
Upload Your Memory View All Memories
Be the first to upload a memory!
Share A Memory
Plant a Tree