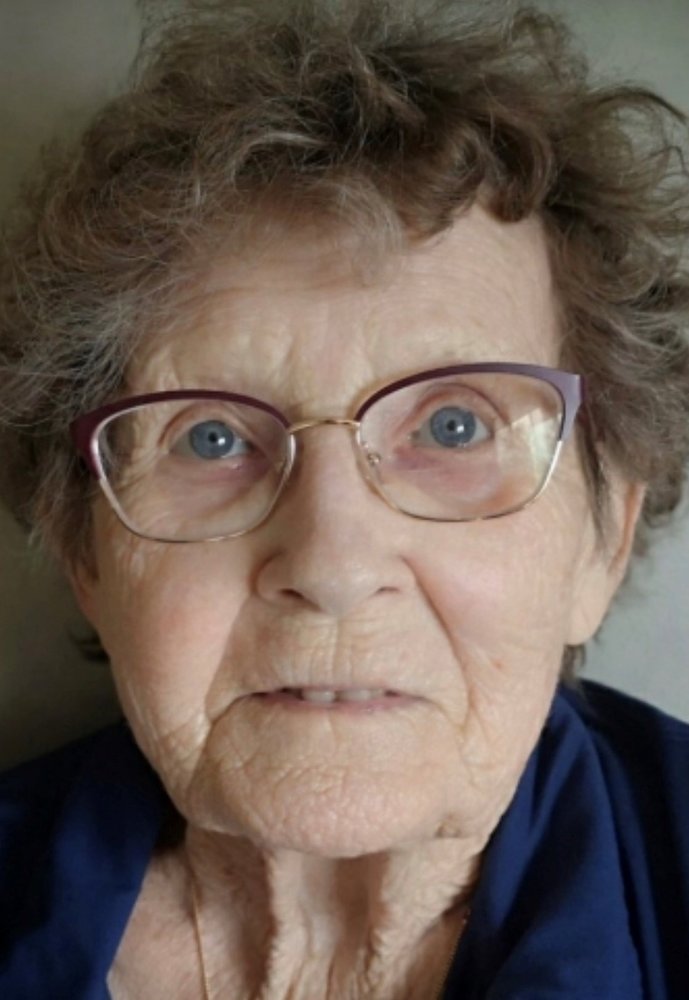 Obituary of Ilene May Gaspich

Gaspich - Ilene May Austin 1931-2020 Passed away peacefully at home with her family on November 17th at the age of 89. Predeceased by Joseph, her husband of 40 years. Ilene is survived by her three daughters Debbie, Linda (Dave Stuart) and Jodi (Derek Chapman). Survived by her four grandchildren Madison, Abigail, Ewan and Liam. Predeceased by her siblings, sister Marjorie Columbus (Charlie) and brother Grant Austin (Marion) as well as her parents Alice and Harold Austin. Born in Regina, Saskatchewan, Ilene lived most of her life in St. Catharines, Ontario. She spent her early years as head cashier at A & P in St. Catharines and moved to Virgil to become grape growers and where she and Joe raised their family.  Ilene enjoyed spending time with her loving sister Marjorie, visiting the casino and taking shopping trips over the border. She loved her independence and settled nicely into retirement enjoying many memories with her loving girls and grandchildren. No visitation will be scheduled. In its stead, the family will be holding a private ceremony. In lieu of flowers, the family wishes for any donations to be made to the Kidney Foundation or Shaver Hospital.

Linda's Tribute to her Mom:

It is fitting to have an outdoor service for our Mom because she spent so much of her life outdoors.

She grew up on a farm outside of Simcoe with a sawmill and worked long hours since she was young.

She learned how to drive at 10 years old because her Dad had an accident that disfigured his arm and he was unable to drive.

She spent some time doing back breaking work in the tobacco fields;

And after she moved to St.Catharines , she worked as a head cashier at A&P. And all of that was before 30 years of working her tail off on the grape farm. She never stopped.

I remember when we went out to work in the vineyards when Jodi was a baby. And when she had a nap, Mom hooked up a series of strings in her crib to a cowbell that Jodi could ring when she woke up.

Even in her 80’s, she worked on Debbie’s landscaping at an incredible pace with her chainsaw and lawnmower. How many 80 year olds have their own chainsaw?!

Hard working and strength are proper words to describe our Mother.

She was very strong in a physical sense – she could still beat me hands down at arm wrestling even in her 60’s.

But also she was a strong, independent woman and we were able to learn from this.

She installed a great work ethic in all of us.

Our Mom was such a well-mannered lady. I don’t think I ever heard her swear. It was fun sometimes, to test her tolerance by swearing in front of her.

She couldn’t even say the word fart – she would say “bang” instead.

And period was always referred to as “your friend”.

Mom encouraged us all to go to university. It was so important to her that if we challenged it and said, well what if we don’t, then she would bribe us and say, “You’ll get a car if you get a degree”.

And she gave us unconditional love.

She was an amazing athlete.

She played a lot of basketball in high school, played golf, and she was in bowling leagues, but baseball was her love.

She had a mean modified windmill pitch and was an outstanding shortstop.

She was actually offered a full time job playing ball in Florida but turned it down because she was dating our Dad at the time.

She was my first baseball coach too and she was always there for us.

I remember the time we were in a championship game, tied, bottom of the last inning, 2 out and I made it to first. She was the first base coach and whispered in my ear – no matter what you are running on the next pitch and slide. And I did, and I knocked myself out. And I woke up with my Mom holding me up by the back my shirt and pouring water over my head.

She was always there for us.

She loved to dance and we danced the jive a lot in our living room and at lots of weddings.

Line dancing was also a passion of hers.

She loved music and in her teenage years she played guitar in a local band. Incredibly, she could play the piano by ear too without ever taking a lesson.

Mom was active in the community.

She was a Girl Guide leader at one time. And one of her Girl Guides, Greer, is here today.

Mom said that she would catch Greer smoking in the bathroom a lot at Girl Guides. But you know, I’ll bet the true story is that she met her there for a smoke, because we know she used to love to smoke. She made many trips to Smokin’ Joe’s for the cheap tobacco and would spend Saturday afternoons rolling her cheap cigarettes on her machine while she watched the WWF.

She became the President of the Grape Growers Action Committee which helped to promote Niagara Wines and put them for the first time on the wine list at prominent establishments like Air Canada and the Federal Parliament buildings.

She headed up a committee for Niagara on the Lake’s bicentennial.

She canvassed for the Cancer Society.

She was a member of the Legion.

Mom had a gigantic vegetable garden and a rock garden that she was so proud of . They were spectacular.

Family always came first for Mom and she would do anything you asked her to.

She moved us with Dad’s pickup truck back and forth to Hamilton, London, Toronto, and Sudbury again and again.

And after she unloaded the truck she would get out her toolbox and put up shelves for us in our closets.

She was so energetic and strong.

She was a ‘Jack of all Trades’. But as she often said, ‘Master of None’.

One night at midnight my gold earring fell in the sink and was flushed down the drain.She got out of bed and got the wrenches out, turned off the water and rescued my earring from the pipes.

She rarely slowed down, except to watch General Hospital, and on Saturday afternoons to watch the great WWF where we witnessed the incredible strength of Andre The Giant, The Junkyard Dog, Greg “The Hammer” Valentine, and the Iron Sheik.

Our Dad seemed a bit jealous that she was so enthralled with the show, and felt he could easily take them down.

Her interest in wrestling seemed to suddenly fade when someone (and I think it was Greer) said to her one day, ‘ You know this is fake, don’t you?’

I think quite frankly, we were all surprised to hear that.

We had a remarkable childhood growing up on the farm with the chickens and the barns and swings and our big play yard, where we used to play with Patty,Terry and Eddy.

We watched the Snowbirds airshow year after year from our backyard,

We had many memorable bbq’s and pool parties with family and friends. Sometimes we used the grapery as the fairway for driving golf balls out of the backyard.

Sometimes we had parties in our famous red room in the basement, where the red shag rug covered the floor and some walls (which was bought for a great deal second hand). We had a fridge at the bar in the red room that Mom always kept full of pop for us and when Uncle Bill and Aunt Barb came over to play Euchre we were allowed to drink as much as we wanted. We just loved when they came over.

Next to the red room was the ‘work room’ which was actually the grocery store because this was where Mom stored her huge selection of products she canned, the most notable being her chili sauce which was a favourite of many of us.

We have so many warm holiday memories of the house smelling of Mom’s turkey or baked pies. I think she was most proud of making the dessert called ‘Sex in a Pan’, but I really think it is because she just like to say it, as that is probably the raciest word she has every said.

We had fun family vacations in Bobcaygeon and in Florida.

And we enjoyed our many trips to Jarvis to visit our cousins.

Mom loved to travel and was able to do more of it after we moved out of the house .

She travelled to Hawaii, California, Arizona, Alaska, Europe, the Carribean and China.

She loved going out for lunch or coffee with her girlfriends Brenda, Shirley, Barb, Maria, Cathy and Agnes. She always looked forward to their birthday lunches.

She loved driving to Jarvis to stay with her sister Marjorie and driving over the river to shop and get gas and the latest bargains at Tops.

She loved all of her grandchildren and she would always brag about their accomplishments.

Mom embraced Derek as a son decades ago, because Derek has been part of our family for forever it seems – over 30 years now.

When Dave came on board, she certainly embraced him as a son as well.

And she was tickled pink when Dave secretly announced his engagement plans with her only.

One thing about our Mom though, (and I don’t know if Dave knows this yet),

is she was not very good at keeping a secret.

Her independence was incredibly important to her.

She never liked to impose on others.

So it was awful for her to have her license taken away because of her vision after her 2nd stroke.

We were hoping she would enjoy her time at Anchor Pointe retirement home, but COVID and more hospital visits robbed her of that.

She has always been a fighter, and rallied back so many times, but 4 heart attacks, 2 strokes, kidney, lung and cardiac issues, and diabetes just took its toll on her. She knew she needed help and moved into Debbie’s where she had constant comfort and love and care and security.

We are so very grateful that Debbie could give her that.

Jack and Milo faithfully surrounded her and protected her.

She left us peacefully, and without pain, and now she can finally rest.

There is nothing as powerful as a Mother’s love.

We are strong women because a strong woman raised us.

We are so fortunate to have had her in our life.

Mom’s life was touched by everyone who is here today. Thank you for sharing this moment with us.

Share Your Memory of
Ilene
Upload Your Memory View All Memories
Be the first to upload a memory!
Share A Memory
Plant a Tree