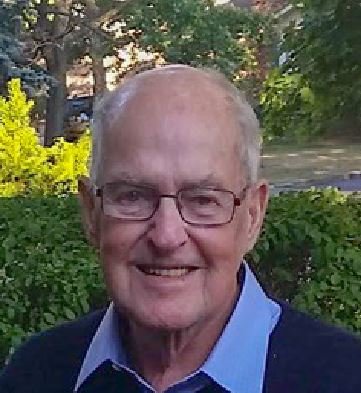 Surrounded by the love of his family, Tom passed away at Henley House on Friday, June 7, 2019 at the age of 86 in St. Catharines. Beloved husband of 60 years to Jane. Cherished father to Kelley Hindrichs (Michael), Colleen Quinlan (Jeff), and Paul Quinlan (Julie). Much loved Papa to grandchildren Carly Machasic (Tom), Bobby and Katy Osadetz, Tom and Rebecca Hindrichs (Benson), Anna and John Quinlan and great-granddaughter Olivia Machasic. He will be sadly missed by his brother Lou Quinlan and sister-in-law Marilyn. Predeceased by his parents Albin and Geraldine Quinlan and siblings Catherine Daly, Joanne Shea and John Quinlan.

Tom was born in St. Catharines and was raised in the family home on Woodruff Ave. He was an avid athlete playing football and basketball at the Collegiate and spending summers lifeguarding at Port Weller Beach. One university was not enough for Tom; he tried his hand at engineering at Queen’s University but quickly found it was not his forte. In 1955 he graduated from Western University and found his true calling in the law. Subsequently, he graduated from Osgood Hall and was called to the bar in 1959. While articling at the law firm of Chown Cairns, Tom met the love of his life, Jane Holland, a young registered nurse at the Hotel Dieu Hospital. Tom and Jane fell in love and were married on June 6, 1959. Tom began his law career with his mentor William (Bill) Coy with the firm Coy, Quinlan, Barch and Brooks. He was elected to the St. Catharines City Council in 1965 for two terms and was politically active in the Liberal Party. In 1977, he was appointed to the Superior Court in Milton, Ontario where he proudly served as a federal judge for two decades. In retirement he travelled across Canada as a judge with the Pension Appeals Board until 2009. Tom was an enthusiastic member of the St. Catharines community, serving on the Hotel Dieu Hospital board for many years. He took pleasure in peaceful mornings canoeing at the Quin-Mill cottage on Otter Lake, puttering in the garden or playing a round of golf with his buddies. He displayed his creative skills through woodworking and stained glass, leaving behind many beautiful pieces for others to enjoy. Tom had a terrific sense of humour and a quick wit, never missing a chance to get a laugh. He was an exemplary role model of faith, humility, kindness and integrity. Tom was much loved and will be greatly missed.

In accordance with Tom's wishes, cremation has taken place. Friends are invited to call at GEORGE DARTE FUNERAL HOME, 585 Carlton St, St. Catharines for visitation on Friday, June 14, 2019, from 2 to 8 p.m. A Funeral Mass will be celebrated on Saturday, June 15, 2019 at 11 a.m. at St. Julia Catholic Church, 251 Glenridge Ave, St. Catharines. In lieu of flowers the family would appreciate donations to the Autism Society of Ontario (Niagara) or the Walker Family Cancer Centre.

Share Your Memory of
Thomas
Upload Your Memory View All Memories
Be the first to upload a memory!
Share A Memory
Send Flowers