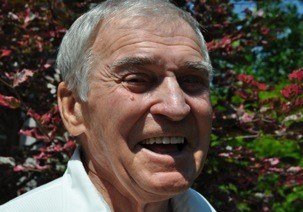 RUSNAK, Dan "Danny" (husband, father and grandfather). Died peacefully at home with his wife and four children by his side on Monday, October 6, 2014. Dan is survived by his cherished wife Verna (nee Ponsford) of 60 years; his devoted daughters: Kathy Brisbois (husband, Marty), Nancy Finlay (partner, Terry), Brenda Cassaday (husband, Terry); and only son, Stephen (wife, Orla). Dan had a large and loving extended family: his loving sister, Pat Caine (husband Paul); kid brother Kenny Rusnak (wife Janice); brother-in-law George Crawford (wife, Joan), sister-in-law Betty (pre-deceased by husband, Johnny); sister-in-law Gracie Hildreth, and brother-in-law and best buddy, Jack Hildreth. Dan is pre-deceased by his sister, Elsie, and brother Teddy. Dan's pride and joy was in many ways his grandkids: Nathan, Tess, Saffron, Emerson, Madison, Kascha, Macaulee, and Rory - who, while sometimes testing his patience, always brought a smile to his face and gave him endless bragging rights. Finally, a quick call out to his grand-dogs: Gracie, Shorty, and Archie. Now a little bit about Dan: Dan was a family man who put his family above all else in the world. He worked tirelessly to make sure his wife and children had everything they could ever want. After being diagnosed with lung cancer in April of 2011, Dan continued to enjoy life to the fullest, despite undergoing a series of treatments that left his body weakened and sometimes unsteady - his spirit and lust for life was never diminished. Born on August 27, 1931 in Thunder Bay (Port Arthur), Ontario. His father, Ivan Rusnak had immigrated to Canada in 1912, at the age of 16, from the Ukraine. His mother Anna Myklak came to Canada in 1922 from the Ukraine. The 2nd of five children, Dan ventured out in the workforce at the tender young age of 15. His first job was in God's Lake (Northern Manitoba) and then Great Bear Lake (North West Territories). In his early 20's Dan's work took him to Niagara Falls. It was here he met the love of his life, his "paper-doll" Verna. They married shortly after, living briefly in Marathon, before settling in St. Catharines - which Dan and Verna called home. Dan's first passion as a boy was hockey. He played at a high level for both the Port Arthur Northstars and Marathon Mercurys. Early retirement at age 60 allowed Dan to his spend time golfing and traveling with Verna, and spending quality time with his children and grand-kids: whether it was eating peanut brittle with Kathy and Marty, golfing with Macaulee, following football with Nathan, sharing a joke with Emerson, or any number of other fun and eventful exploits, Dan loved spending time with his family. Dan was a skilled craftsman, helping his children whenever he could to create and enhance their own homes. He loved Ireland greatly and visited often, having great times with his son, Stephen, and youngest grandson, Rory. Family also took Dan to Muskoka each summer and Sanibel Island each winter where he taught his grandkids to fish and golf. His love for Thunder Bay, Ukrainian Christmas celebrations and his siblings kept him in close contact with his heritage and family. Dan loved life. His family and friends will miss him greatly. But he has left a lasting legacy and many happy memories for those whom he cared for most. In accordance with his wishes, cremation has taken place. Dan's family will receive visitors at the GEORGE DARTE FUNERAL CHAPEL, 585 Carlton Street on Wednesday,October 8th from 3-4pm. A service to celebrate his life will follow in the funeral home chapel at 4pm. In lieu of flowers, the family asks for a donation to be made to the Dan Rusnak Thunder Bay Hockey Association Bursary. Contact details: The Dan Rusnak Hockey Bursary Thunder Bay Minor Hockey Association 212 East Miles Street, Suite 101 Thunder Bay, Ontario P7C 1J6 Or by phone: (807) 346-4510 About the Bursary- Recognizing that financial conditions can sometimes prevent talented young players from pursuing their dreams, the Dan Rusnak Bursary was established.
Wednesday
8
October

The family asks you to join for a celebration to take place in the funeral home at 4pm.

Share Your Memory of
Dan
Upload Your Memory View All Memories
Be the first to upload a memory!
Share A Memory
Send Flowers
Plant a Tree