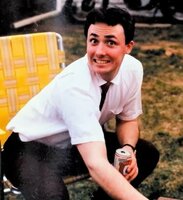 Fox, Russell Kenneth -The Fox Family is shattered to announce the death of one of their greats, Ken, R. Ken, Tiger, Russell Kenneth Fox. Ken died on June 27, 2022 leaving behind his beloved and bereft daughters Naomi and Sophia, and their devastated mother, Jane Blamires. Ken is survived by his loving mother Patricia Fox, his best friend and sister Tracey Fox, her partner Karen Moncur and his nephew Jack Moncur. He was the dear brother-in-law of Ruth and Jason Rawsthorne and loving uncle to Grace and Nicholson Rawsthorne. Ken was predeceased by his father Russell H. Fox and his grandfather Henry Fox.  He was a graduate of St. Catharines Collegiate and while there was in the football championship and in the North American Rowing Championship, very proud accomplishments. Ken was a longtime employee of the City of Hamilton where he capitalized on his love of tinkering and problem-solving. He was an accomplished and talented Instrumentation Engineering Technician and was highly regarded in his field. Throughout his life he tackled many hobbies and projects, taking up and abandoning golf, photography, poetry and most importantly fishing. Many a summer’s day was spent casting and reeling with his two beautiful daughters, they were his pride and joy, teaching them ever important lessons, usually by showing them what not to do! Ken was on the cusp of a new beginning in his life and it is especially cruel that his body gave out on him before he could embark on that journey. We hope he has found the peace he craved. Cremation has taken place. The family will receive visitors at the GEORGE DARTE FUNERAL HOME, 585 Carlton Street, St. Catharines on Wednesday, July 13th from 6-9p.m. A Celebration of Ken's Life will take place on Thursday, July 14th at 1:30p.m. in the Funeral Home Chapel. Memorial donations to Community Care - St Catharines would be appreciated by the family.