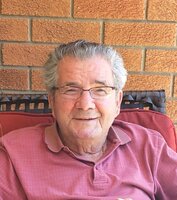 Charles was  born in Emerson, New Brunswick on October 16, 1939, beloved son of the late Harry and Vera (Beers) Lynds.

Charles was one of eleven children, he was raised in New Brunswick until his teenage years when he moved to Ontario with his mother and resided for a brief time in Oshawa, but shortly thereafter moved to Sudbury, where he met and married his loving and devoted wife Vera (Antonioni) Lynds in 1961, and began to grow their family, finally settling in St. Catharines.

Charles loved the game of hockey and was a die hard Leafs fan. He was fortunate enough to have the opportunity to coach his sons through the CYO hockey league, along with many other Western Hill children. He was also an avid golfer, given the opportunity, you would find him on the golf course with friends and family. Charles loved music,  in his quiet time you could find him playing his guitar and the harmonica, he also had a love for old cars.   Charles was a hard working man and after many years in the paving business and decided in 1978 to branch out on his own, with his wife by his side. He successfully operated  C. Lynds and Sons Paving for 30 years,  in 2008  he retired and passed on the business to his sons who continue to grow it to this day. Charles then spent  his winters in his second residence in Florida which allowed him even more time to be on the golf course.  Charles true passion was family and his retirement allowed him to focus on his children and many grandchildren.

Survived by sister  Mona, Karen, and Brother Myles and sister in law Jeanette and Gail.

The family would like to convey special thanks to the staff of Tufford Manor and Westhills Nursing home for their kindness and support in his last year.

A private family Celebration of life has already been held as per Charles wishes.

The family would appreciate  donations to the Alzheimers Society in lieu of flowers.