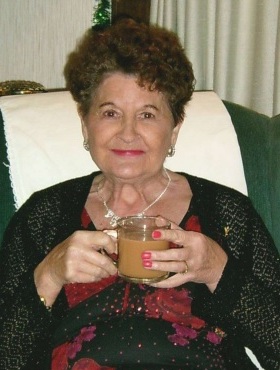 Margaret Ann Webb passed away peacefully at the United Mennonite Home in Vineland, Ontario on June 14, 2022 at the age of 89. Margaret was the loving wife of Dennis Webb who passed away in October 2000, cherished mother of Kevin (Patricia), Julie (Rick) and Tim (Jane). Beloved grandmother to Ashley, Meghan, Cole, Eliza, Leonie, and Catherine. She was great grandmother to Aurora (Elizabeth/Joshua) and Elouise (Eliza/Joshua).

Margaret is survived by siblings Audrey, Dorothy, and Raymond and predeceased by Iris.

Margaret was born on February 7, 1933 to father Samuel Turner and mother Charlotte in Leeds, Yorkshire, England as the eldest of 5 children. Samuel was a carpenter eking out a living during the Great Depression and they were subjected to bombings during World War II.

In 1943 Charlotte died from Pneumonia and Margaret and Audrey were placed into a Bernardo’s home by their father. It was many years before her and Audrey reconnected with their other siblings and she didn’t see her father again until the 1970’s, just before he died.

Margaret was a beauty queen for a local pageant in 1953 and married Dennis in March 1954 at All Saints Church in the village of South Merstham, Surrey. Kevin was born in May 1955, Julie in September 1958, and Tim in November 1963. In July 1965 the family emigrated to Canada and settled in St. Catharines, first at 106 Niagara Street, followed by 25 Beachaven Drive and then in December 1970 they purchased a house at 276 Grantham Ave.

Margaret was a dedicated housewife, mother and grandmother. She worked tirelessly to maintain her home. She loved baking and swimming in her backyard pool. She became a Nurses Aid and worked in Long-term Care and then casually at the Hotel Dieu Hospital until fully retiring in 1998.

The family would like to thank everyone who expressed their condolences upon learning of Margaret’s passing. Funeral arrangements were entrusted to George Darte Funeral Home, 585 Carlton St. On June 21, 2022 a private graveside funeral service was held at Victoria Lawn Cemetery.