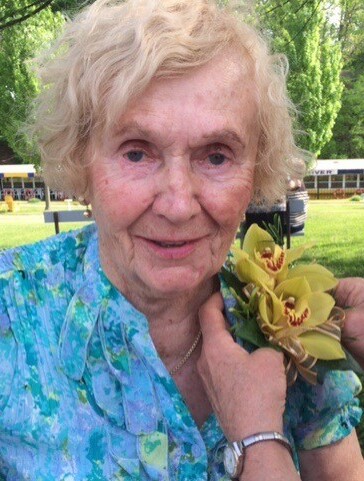 Dietlind (Dede) Krenz (nee Hart) was born on May 29, 1936 in Lublin, Poland. She was the third child of Olga and Alexander Hart and sister to Eugene and Lucy. Her family moved to Germany at the beginning of the Second World War. Upon the conclusion of the War and her father’s safe return, she and her family migrated to Canada. Her father pastored many churches in Western Canada and eventually settled in St. Catharines, Ontario, to pastor Immanuel Baptist Church.

Dede would go on to pursue work in Toronto, where she stayed until the passing of her father. She then decided to move back to St. Catharines to care for her mother. She had jobs at the Hotel Dieu Hospital, Foster Wheeler and ended her working career at the Heidehof Retirement Home.

Later in life she met the love of her life Walter Krenz and after a lengthy courtship they married and settled in St. Catharines.

Throughout her life, Dede had an adventurous spirit and travelled extensively. Some of the many things Dede enjoyed were hiking, skiing, and watching the sunsets at Port Dalhousie. Dede will be missed by her family and friends.

In keeping with her wishes, funeral arrangements have been entrusted to GEORGE DARTE FUNERAL HOME, 585 Carlton St., with a service being held at Immanuel Baptist Church, 605 Vine St., St. Catharines on Friday, June 17th 2022. The family welcome guests for a viewing from 10:30AM to 11:00AM with the funeral to begin at 11:00AM. A burial to take place at Victoria Lawn Cemetery with a reception to follow that will be held at the Immanuel Baptist Church. Please consider a charitable contribution to the Heart & Stroke Foundation and/or to a charity of your choice in the memory of Dede.