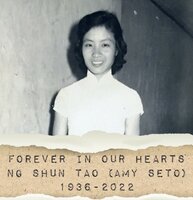 An angel has been sent to heaven to be with her late husband, Nay Sen Seto. Now together they will watch over the rest of us. It is with heavy hearts that we share with you the passing of Amy Seto (Shun Tao Ng,1936-2022) in her 86th year. She passed away peacefully on Tues. March 22, 2022 at The Meadows nursing home in Ancaster, Ontario, surrounded by her loving family. Beloved wife of the late Nay Sen, Amy will be deeply missed by her daughters Jenny (Ron) Seto-Vanderlip, Cindi (Mario) Seto-Domanico, and son Scott (Donica) Seto, her grandchildren, Matthew (Shannon) Vanderlip, Taylor (Maeva) Vanderlip, Brittany (Kosta) Vanderlip, Carly Domanico, Nikki Domanico and Ciara Seto, and her great-granddaughters, Elise Vanderlip and Nora Vanderlip. They will miss their Popo dearly.

Amy will also be sincerely missed and remembered by her many surviving sisters and brother, nieces and nephews in Hong Kong, Denver and California, and many other relatives in Toronto and St. Catharines.

Amy was born in Hong Kong in 1936. She immigrated to Canada in January 1960 to marry the love of her life, Nay Sen. Together they would work many years in their family restaurant business, The Maple Leaf Cafe (St. Catharines) and Club 19 (Niagara on the Lake). They later moved on to work with relatives in Fort Erie and Niagara Falls.

Amy spent the last 7 years at The Meadows nursing home in Ancaster where she was well taken care of by the amazing staff. There, even though she was dependent on others for care, she continued to make everyone around her smile. The family extends their deepest gratitude to the nurses, PSWs, the support staff and The Meadows administration for making the last 7 years of her life comfortable and enjoyable.

Amy enjoyed time with her children and had the opportunity to travel with them to many places around the world. Most of all she looked forward to the visits from her grandchildren and great-grandchildren. She loved to cook for them and made the best Cantonese chow mein, beef and green beans and waffles.

Amy will always be remembered for her strength, selflessness, an enormously kind heart and her care for others. We can only hope to become the amazingly strong person that she was. It’s no wonder she was the favourite aunt, Popo, sister, cousin and friend. Amy’s time on earth was a gift to all of us. We will miss her dearly.

Memorial donations can be made to the Cancer Society or the Heart and Stroke Foundation.

A Celebration of Life will follow in the Ceremony Room of the Funeral Home at 1:30pm

To view Amy's Celebration of Life, use the following link https://youtu.be/y6DsXd9GyGU

My Popo has always been my hero, ever since childhood. Her resilience and strength to overcome everything that she's been through would be inspiring to anyone. She taught me culture, courage, how to be open-minded and encouraged me to try new things.

She taught me that rice cookers always made better rice than on the stove,

She showed me how to bargain at the Dollar Store

And most especially, she taught me the importance of family.

Although she wasn't fluent in English and there was a slight language barrier between us, we were ways very close and had a connection on another level.

A vivid memory of her when I was young: I didn't want to go to school and I was acting out, so my parents took me to stay at Popo’s house for the week. Each day she would cook me delicious Chinese dishes, take me shopping and call me a good boy even though I was staying there for being naughty. She knew positive reinforcement was the way to my heart.

She enjoyed simple things in life. Bruce Lee and Kung-Foo films, Filet-o-Fish from McDonald’s, and pretty much any type of candy or sweet.

We have had 7 years to prepare for this moment since her fall, but I knew it would still be one of the hardest days in my life.

There will always be a special place in my heart for you Popo.

I love you, forever.