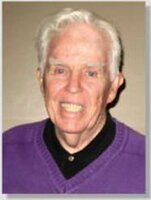 Passed away peacefully at his home in St. Catharines on Tuesday January 4, 2022 at the age of 92. Bob was married to Nancy for 62 years and will be lovingly remembered by their three children Bradley (Kristy), Derek (Donna) and Jennifer (William) as well as their grandchildren Connor, Leanne, Jillian, Samantha, Abby, Liam, Noah, Owen and Declan. He is survived by his brother Jon DeForest and sister Diane Bellefeuille.

Bob was born on April 25, 1929 in Toronto, and grew up in Hamilton. He later moved to Winnipeg where he joined Investors Group and became a Certified Financial Planner. He returned to St. Catharines in 1970 to establish new offices in Niagara and retired there after 40 years with the firm. He was a dedicated Rotarian who was recognized as a Paul Harris Fellow for his exceptional service and commitment, an active member of Probus, and for many years a director at the Ontario Science Center in Toronto and the YMCA in St. Catharines.

Bob’s imagination and creativity were expressed in carpentry and artwork. He could often be found tinkering in his workshop, and in retirement his talents in wood carving and painting produced works that are cherished by his family. He enjoyed the outdoors and passed on his love of sailing and skiing to both his children and grandchildren. He and Nancy spent 60 wonderful years at their family cottage at West Hawk Lake in Manitoba, enjoying many lifelong friendships.

Bob was known for his kindness and witty sense of humor. He will be remembered for being a modest and humble man; an eternal optimist who aged gracefully and led by example. His life embodied the substance of a quote he carried with him: “The remarkable thing is we have a choice every day regarding the attitude we will embrace for that day.”

Funeral arrangements have been entrusted to GEORGE DARTE FUNERAL HOME, (905) 937-4444. A Celebration of Life will take place at a later date. In lieu of flowers, memorial donations can be made to the Niagara Symphony Orchestra or the Rotary Club of St. Catharines South.